In order to distract attention from introducing a wig into a semi-familiar social situation there is a certain logical sequence of steps. My loved ones know about my head. And as I’m not taking on any work projects, only of few of my trusted colleagues are any the wiser. My neighbors pay little attention to me, which is kind of a blessing. So that leaves the dog park. It is there where I’m forced into socialization, where the same faces gather night after night to engage in small talk about property taxes and poo.

Since I’m a familiar presence in the park, but with only one actual friend, the consistency of my hair-do was of a major concern. So back in the summer, this is what I planned.  Purchase a wig that mirrors my own hairstyle, or a similar one that I like. Cut my hair shorter, but wear the wig out in public.

This is what I did. Bought a wig that looked like my own brown bob. Cut my hair. Loved my new hair so much! ($100, by Cosmo). Was told by my friends that I should have done it years ago. Wore my short hair everywhere. Accepted compliments at the dog park. Cut my hair a bit shorter.  Went out with just a hat. Went to the dog park where people commented on my changing style. Not too many compliments. Shaved my hair right off. Had to wear the wig. Wig is long.

So I found myself in the dog park last night, with the back of the wig tucked under a knit cap, and my long bangs sticking out.  I tried to stand alone, but that’s not the way things happen.  Trapped in the confines of the fence, one is prey for other dog people who are desperate for after dinner conversation. So I got a few confused glances, but nobody said anything out loud. And I didn’t have any clever answers tucked away in case I needed to explain how I went from sporty to soft, overnight. 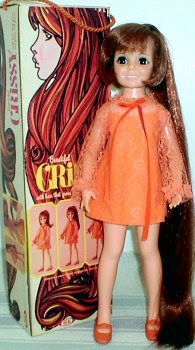 Then I remembered Crissy. Crissy was the doll I was never allowed to have, the 18” glamour girl (Circa 1971) with auburn hair, which could be adjusted to various lengths, at will!  According to Wikipeida, this is how it happens. “With the Crissy doll’s hair fully or partially extended, turning a knob located on the doll’s back retracts the hair into the torso to be wound on an internal rod or spindle. Pushing and holding in a button on the doll's abdomen disengages the locking ratchet to allow the hair to be pulled back out of the Doll's Head.” This is the doll’s main appeal. What isn’t appealing is that she actually had a stomach full of hair. And that you could yank her by the ponytail. But what is good is that someone with my hair issues has already existed, and I’m banking on the subconscious memories of the gals in the park to realize that the concept of immediate hair growth really isn’t that strange.

So for most people in the dog park I’m the lady in hat and with a very loud basset. But for those lucky few born in the 60’s, I’m Movin’ Groovin’ Crissy, glamorous auburn haired party girl, with a ratchet in my back, a belly full of hair, and the ability to change my style, at will.