Hound with a Hairdo

My wig doesn’t get out much these days. And when it does, it’s often removed once I get indoors whether it’s my home, or someone else’s. As it lays there neglected, I ask those near and dear to me if they’d like to try it on for my amusement. I offered it to my nephew, and he shook his head with a hint of not-so-well-disguised disgust. Jim declined wearing a brown bob, as did my sister Sue.

So yesterday I was sitting on my bed sorting laundry when Jed came sniffing into the room. I looked at my sweet dog adoringly. He’s been my best friend during the last eight months. He doesn’t care that I’m was bald, or crabby, or tired. And he never complains when I have to cut short his walks, in favour of a nap.  And he lets me curl up in his bed, when I’m really really tired. 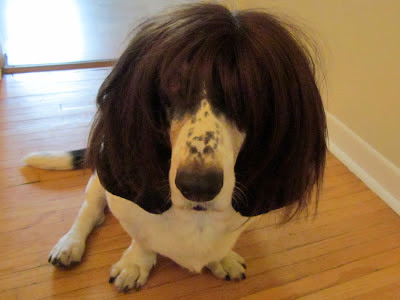 He came over for a little pat, and then got busy digging his snout into a pile of laundry. Buried in the pile was my $1600 wig. I don’t know how it got there, but it doesn’t surprise me much, since I’ve become quite careless. Jed pushed the wig around with his nose.

He’s the first person being who has expressed any interest in my fake hair for a long time.  So taking advantage of his generous nature, and for my own amusement, I asked Jed if he’d like to wear my wig. And because he is by best friend,  he said yes.
Posted by egghead at 12:19