Cape Breton is somewhere I often go, thanks to Belleruth Naparstek’s Guided Meditation CD, which take me my ‘favorite places’.  Last week, thanks to West Jet, I went there again for real.

It had been just over a year since we'd been there, and had a visit to the to church. The little white church is in Orangedale, and it was where my grandfather preached as a minister for 24 years. It is a very small building, as it is in a very small village, with a population of about one hundred or so. The town has a store and a post office, and not a whole lot else, except some people who are very dear to me.

On last year's visit, I sat on a wooden pew thinking about my future. Specifically, if I had one.  I was pretty certain that things would be okay, but on very rare occasions, I’d imagine a petulant little voice saying, ‘Says who?’ It was the very early days of my diagnosis and all we new was that the tumour was for real, and it was the bad kind. In fact, the day before I left the city, my doctor phoned, and said, ‘its worse than we thought’. 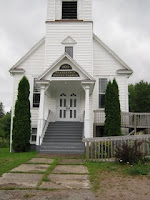 So I sat in the pew and thought about stuff. I thought that being in that little wooden church would give me a direct line to my father, the son of my grandfather, and told him that I hoped he was happy wherever he was, and that he had lots of people to hang out with, because he wouldn’t be seeing me in his world for a while. And I asked my grandfather, very humbly, to put in a word with his big boss, to leave me here with my family. And then I had to apologize for not having being in church for the last twenty years, except to go to the occasional wedding and my cousin’s daughter’s christening. Even then, all I thought about was the warm white wine and crustless sandwiches that would be my reward.  Given my crummy track record, I didn’t think I had the right to favours, but on this occasion it didn’t hurt to ask.

Many of the pews were empty.  Jim sat on one side of me, and my Orangedale family on the other. They didn’t know that there was anything different about me. Jim however, did. But the information was so new, and so startling, that we didn’t know how to process it. Sometimes it was easily forgotten, and other times, it had huge importance. And sometimes, when we were looking at the eagles,  we just plain forgot.

But that Sunday morning I couldn’t forget. I’d never had the experience of being in church and wanting so badly to connect. I like church, but I’m not religious.  I have no solid convictions, but I like being somewhere that is a force for good. And as may have mentioned, I’m fond of crustless sandwiches, especially the egg.  So I sat there, feeling tiny in the universe, and waited for the minister to take his place.

When the minister made her entrance, she did it in a way that only a Cape Breton minister could. With warmth, and greetings, and a lot of cheery chit-chat about the day. She was about 50, and walked down the aisle with a cloud of energy – sort of like Pig Pen with his cloud of dirt – only instead of dirt there was glee. She was stilla student of theology, and had only recently started giving sermons.  I like to think that she left her old life in a red convertible with only a suitcase, but who knows. It’s all about second chances, anyway.

Then she stood at the front of the wee congregation and adjusted her robes, in the manner of someone who looked down and was surprised to notice a gown and collar. And then she started talking.  Well, this was no grandpa’s sermon form 1974. This gal was having a great old time. She was clearly happy about life, and even fist pumped a few times as she talked about the villagers' small victories. And then she got serious for a second and wish us all peace. She cast her kind gaze around the room and prayed for everyone who had ‘an illness, or a hardship’.  And then I swear that her sparkly eyes rested on me as she offered a prayer for, ‘anyone  waiting for a diagnosis’.

I felt like the lamb in a biblical painting, under a beam of light.  Or Maxwell Smart, listening to the words of Chief under the cone of silence. Her words felt they were directed me. Or maybe that is the power of church, to allow each individual to receive his or her comfort. I didn’t know what would happen, or even what the future held, but I knew in my heart that I was being looked after and that things would be okay.

It was last Monday when we drove back into the little town to join the Orangedalers for supper.  Jim and I came bearing a couple of pies, a bag of beer, and matching ostrich hairdos. Nothing seemed to have changed, but I don’t want to be too quick to say that, since the town could say the same thing about me.

But before visiting, we drove down the hill to take a look at the little white church. There was nobody there, and the building not open.  The double front doors were pressed tightly together, like someone holding their hands over their heart.  Though I’ve known this church for over 40 years, it had taken on a new meaning for me and I felt I was beginning to understand its’ importance.  My dad had grown up in that church. Births and deaths had both been celebrated under that roof, and a community was held together. And when I was ready to let it, it welcomed me in and shared its hope and certainty.

I said a little thank you to the small wooden building and headed back up the hill. On Maple Drive other beacons awaited. So we headed up to Kathleen’s kitchen to another form of worship; a freshly cooked lobster, potato salad, and a cup of melted butter.