I can spot them a mile away.

This time was at my local grocery store, and she was dressed in expensive yoga gear from head to toe.  Her mat was slung across her back, in it’s own Lululemon bag, and her hair was pulled up in a lop-sided bun. Regardless of her outfit I knew she was one of us; the middle-aged crazies are hard to hide.

When I first saw her I was standing in line. (Sadly, I had thirteen items, so I was standing in one of the slower lines). She came crashing through the front doors, picking up speed as she moved past the check out lines. She speed-walked through the produce section, past the frozen foods, and took a sharp turn down the cereal aisle.

For a moment I thought I’d lost her! I’d extended my neck as far as it could go and was spinning my head like an ostrich. I knew she wouldn’t be long. 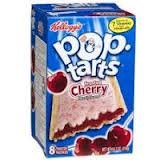 Seven seconds later she remerged, frantic and glistening, her yoga mat swinging across her back like a sac of arrows. At the risk of mowing down a small Chinese man, she sprinted to the ‘Express’ lane. I was practically beside her now, and I recognized a kindred spirit - as I am intimately familiar with the glassy eyed mania of a peri-menopausal woman on an urgent quest. Beads of sweat were forming on her upper lip, neck veins were bulging, and in her hand was a single box of Frosted Cherry Pop-tarts. With sprinkles.

I’ve been in that situation before. Many times I’ve had to make a serious detour to satisfy a craving. Chocolate Brownies when I was a teenager, French fries when I was hung-over, and more recently, Hagen Daaz ice cream straight from the container. And the challenge is always the same – how fast after you have it in your hand can you get it to your mouth.

Yoga lady was thinking the same thing. Because of the way her leg was shaking I doubted that she’d even make it outside. I also doubted that she’d actually made it to a yoga class. I am familiar with that too. There been times where I’ve tried sitting still and enjoying the sounds of ‘Om shanti shanti shanti’, and the only thing I could think was, ‘Oh shut-up shut-up shutup'. And I’ve left.

Crazy yoga lady finally made it to the front of the line and flung a five-dollar bill at the cashier. As she raced toward the front of the store she started tugging at the top of the box. By the time she’d stepped through the doors, she had the interior pocket between her teeth, and was trying to rip it open. I paid for my groceries and ran out to the sidewalk.

She was about twenty feet ahead of me now walking leisurely down the road. She’s had her fix and was feeding herself slowly. I new from experience that she’d inhaled the first pop-tart, and maybe the second. Women know these kind of things for certain.

I also knew that from now on her day would just get better. She’d returned to her normal self and was now just another stylish yoga lady. Covered in sprinkles.