My Russian nurse came by for his last visit. Or so he says. We’ve said good-bye before, after my post-op treatment, where he said he hoped to ‘never to have to see me in this house again.’ But he did. And he quite liked it! He said he enjoyed the calmness, and the pets, and the music.

(This time there was no music, as I was fully immersed in a home decorating show, and didn’t have time switch it off. So, instead of the cool new-world-music kind of gal he’d come to expect, he got that real me. The shallow version.) 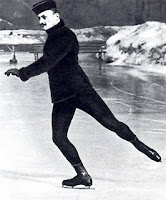 Alexi and I compared notes about Christmas and the New Year. I told him about my olde tyme skating party, to which he scowled, ‘I hade skading.' Turns out that it brings back bad childhood memories when he was forced onto the ice in freezing weather wearing a furry muskrat ushanka, complete with earflaps and a string under his chin. (I’m assuming the fashion details). Instead he’d opted for New Year’s champagne and ‘too much food’ which he illustrated by patting his perfectly flat stomach. And then he gently jabbed me in the ass with one last perfect $ 2,700 needle.

So for (allegedly) the last time, Alexi slipped on his fancy leather gloves and headed for the door. I was reluctant to let him leave, having learned so little about him. Our relationship wasn’t balanced. I pried, he deflected. I knew only that he prefers champagne to vodka, his wife is an artist, and he’s a Reiki master. Also, he has Pomeranian dog, and he grew up in a nice (but chilly) apartment in mother Russia. He knows so much more about me. He’s met many of my family, and has seen me topless, bald, and sort of bottomless.

As he left I gave him a hug, and he hugged back and wished me only good things. I thanked him and told him I’d miss his visits. He nodded. ‘And by the way,’ I said, ‘My mom thinks you’re gorgeous.’

That got him. With one gloved hand on the door he bowed his head, and smiled. I think he was even blushing. And then he exhaled a noise that sounded that sounded almost happy and said, ‘I’m very flattered.’

And with a bit of crimson still in his cheeks, he nodded once again, adjusted his Hugo Boss jacket, hopped in his silver Jaguar, and drove off into the sunny afternoon.