Well this is fun! I have to take 1,825 pills. Not all at one time of course - they’re taken over a period of five years.  After all the treamtent us cancerisits patients have been through - chemo, radiation, surgery, you’d think that a pill a day would be a cakewalk. But it’s not. Taking a pill a day is actually something that is quite difficult for me. 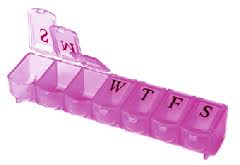 The act of taking the pill isn’t a big deal; it’s remembering to take it that’s hard. Halfway through yoga class, mid-downward dog, I’ll start wondering if I’ve taken my daily pill. Or yesterday’s daily pill for that matter.  Often I haven’t. Perhaps it’s because I don’t enjoy this little pill that has thrust me into menopause with hot flashes so severe that it feels like my insides are melting. But take it I must, as it interferes with the activity of the estrogen that canceritis cells need to grow.

In an effort to be more efficient I put the pill bottle in my underwear drawer thinking my daily pill could be paired with my daily undies. But I still forgot. So I went to the drugstore to if I could find a solution. I wandered over to the ‘accessories’ aisle and come across a revolving display stand that was garnering a bit of attention. A couple of whispy haired senior gals were spinning the stand slowly, plucking off packages and bringing them up close to their little faces to read the fine print. I realized that the thing in their wrinkly hands was the thing that I needed – a pill organizer.

Instead of making me happy, it made me really depressed. Did I really need a cheap plastic container with the days of the week on it to organize me medication? Sigh. Yes, I did. The seniors were fumbling around with the various models, tasting the lids for maneuverability, and testing how well it slipped into a handbag. Some containers were small, but others were as big as a paint set, with little compartments for morning, noon, and night.

I reached over the little people’s heads and grabbed one, which was the size of a ‘Crunchie’ bar. It had seven compartments, one for each day of the week. The seniors looked at the case in my hand, then up at my face. ‘That one doesn’t close so good,’ said one of them. I tested it, and it seemed fine. With her eyes she motioned to one up higher. ‘You’ll be wanting that one.’  So I reached up and grabbed it, and it was pink! And, at half the size of a Crunchie bar it fits discreetly in my drawer, where it is surrounded by my panties (which do not have the days of the week).

I wondered if the seniors were curious about why someone so young and lovely as myself needed to take a pill every day. But they didn’t care. I was part of their club now, and didn’t have time to give it any more thought because there in the chilly air-conditioned store,  I was starting to sweat.

Cancer Hasn't Made Me Nice

There is a rumour swirling around that dealing with cancer makes one nicer. Because we’re confronted with life and death situations (mostly life) and an astounding array of possibilities, we are somewhat humbled by the power of life. The result of that I guess, is heightened consideration and a great depth of feeling.

‘There but the grace of God go I’ passes through my head when I see the homeless man sitting outside the hospital. The small things in life are so important, and it is no sacrifice for me to give him enough money to buy a large cup of coffee (but not quite a frappucino). Misfortune, at one time, was someone else’s problem, but now it has involved me. We are a big club, no matter how we’re dressed, and I feel more inclusive to those whose luck isn’t guaranteed.

So it would be nice to think that canceritis had changed me, and that it’s silver lining would be compassion and understanding. And I thought that was the case, until last Friday when I walked into a furniture store and was greeted by a man in a neck brace.In theory, there’s nothing funny about a neck brace. Some poor soul had obviously been through trauma and was in a lot of pain. But in reality, neck braces crack me up. So when them man came over and asked how I was doing, it was all I could not to giggle.

The brace covered his whole neck with elevated areas around his jaw. And because it was made of hard plastic, the man’s jowls were pushed in which accentuated his lips, making him look like a blow fish. To make things even better, his eyes bulged a bit, as they had to compensate for his inability to turn his neck.

Of course I thought of the Brady Bunch episode where the family’s car was in a collision. The other driver claimed whiplash. However, he was discredited when Mike (the architect) deliberately drops his briefcase on the floor and he turns to see it. So I had the urge to throw my car keys across the store. Not to see if this guy would turn is head, because his injury was legit, but to watch him turn 180 degrees all in one piece.

But he was very nice. I was interested in a bookcase that was at he back of the store, and I described it to him. ‘I know the one,’ he said, and started to pivot slowly like a plastic doll (circa 1960) with no moveable parts.  ‘Ah there it is,’ he said, his eyes doing all the work, ‘Let’s go an look at it.' So he walked slowly and purposefully across the store, occasionally bumping into low-lying furniture. And I followed behind, chuckling softly, and wondering what would happened if I tickled him.

I never asked him about his neck. That in itself doesn’t make me unkind. I just truly didn’t care about the events leading up to his present condition. I was more concerned with ‘living in the moment’ and enjoying the spectacle of his little blowfish mouth telling me about adjustable shelving.

Maybe that part doesn’t make me so nice. But when I’m back at the hospital on Wednesday, Homeless Guy gets a latte.
Posted by egghead at 07:15 No comments: