Samantha was the first person I thought of this morning. That is, fictional Samantha, from Sex in the City. There is an episode where she contemplates plastic surgery, and at her visit to the surgeon’s office, he draws on her with a black marker.

I remember watching that scene about twelve years ago (and more recently on DVD) and thinking how barbaric it looked. I also remember clearly thinking ‘ I will never do that’. And apparently she thought so too – and ran out of the office into the waiting arms of her girlfriends and a frosty martini. 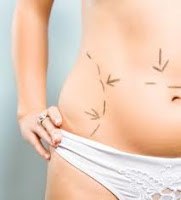 But I am doing it! Every time I think I have all the details covered, I drudge up another disturbing fact. Here’s today’s fun fact; I have to stand naked in front of my surgeon, while he scribbles on my tummy. And from what I’ve seen on TV – it’s not very scientific. It’s like a football coach scrawling on the blackboard, mapping out the next attack. Only, I am the blackboard, and there’s no chalk – it’s a Sharpie.

I know from experience, that I might buckle at the knees. I did that when I stood in front of him last time, and he squished my belly as though I was an avocado. That wasn’t scientific either. He was checking to see if I had enough tummy to make two new breasts – and it was just squish squish squish, followed by, ‘Okay. That’s good.’

So yesterday I called the Dr H’s office in a panic, to ask when the doodling would take place.
‘6 am. On the day of your surgery’.

Oh my God. Bring on Belleruth. If Samantha couldn’t do it – I don’t stand a chance! I’m going to need some courage, as well as my magical friends and allies. I try to remember that there are some things that can’t be controlled. The big black Sharpie is out of my hands, and in the small hands of a talented surgeon.

And then there are the things that I can control. I can’t follow Sam’s footsteps out of the office, but until that time – in 19 days -  it’s girlfriends and frosty martinis.
Posted by egghead at 05:51 1 comment:

Well last week Angelina stole my thunder. When her decision to have a double mastectomy was splashed all over every newspapers around the world, I got royally kicked off my thrown.

I don’t know if journalists were impressed by the surgery itself, or by the fact that Angelina managed to go through it so privately. Either way, they referred to her as ‘brave’, and as a ‘hero’.

She certainly is brave. I know first hand that the decision to do something so drastic to your body is intensely difficult. It took me months to come to the conclusion that it was the right thing, and sometimes I’m only 85% sure. Not only is it a distortion of your old self,  but the recovery period is daunting.

So, brave? Absolutely. But heroic? No it’s not. There’s nothing heroic about it. She made a logical decision and bravely took a big step to drastically reduce her risk of cancer. It takes a lot of strength to do what she did, and she did it, most likely, with the support of a great medical team, as well as a team to take care of her family.

There’s another woman I kno, who was diagnosed with breast cancer. She’s raising three kids on her own and works full time. She had her surgery, and went through chemotherapy. While she was going through chemo she got her black belt in karate. And when chemo was completed, she endured a ten-hour surgery to have a double mastectomy with immediate reconstruction. And then she had a three-month recovery relying on friends, and her own resilience. And she did it because there was no option.  Nobody called her a hero.

Jen probably rolls her eyes when Angie is pictured holding her six kids as she walks down the beach. Sure it's tough to be a mother, but behind the camera are a team of nannies, chauffeurs, bodyguards, and a big bag of money.

I rolled my eyes when Angelina is touted as a role model.  I believe she is raising awareness for the BRCA mutation, and is an inspiration for many famlies. And she is strong and brave.

But a hero? Nuh-uh. Jen and I are climbing back on our thrones, and we toss our hair in indignation.