A nurse has come to change my bandages on a daily basis, since my surgery one week ago.

I watch her while she does this, checking for any sign of flinching or disgust. But her face remains impassive, and she moves with brisk efficiency. Her only comment was, ‘What a nice clean cut!’

I had to take her word for it because I’d never seen it for myself.  The bandages were waterproof so when I showered I left them on, content to let nurse Debbie deal with it later.  When I was in the hospital Doctors and Nurses would come  to check all the wounds – breast, breast, and tummy. They’d come in every hour with a flashlight, I’d undo my gown and they’d start their inspection.  I was on morphine – so I didn’t care.

They also had a little machine called a Doppler. And they waved the wand across my boobs and we’d hear a loud crackling ‘Whoosh Whoosh’. They explained that was the sound of blood flowing through my re-attached arteries. Amazing.  It sent shivers down my spine. I loved hearing the sound of my blood, but but as much as I loved it,  I didn’t want to see it.

Yesterday I was at home, standing in the shower. Nurse Debbie had bandaged me loosely that morning, so my wounds could breath. In fact, she said the fewer bandages the better so I had a minimum amount – just enough to protect me from my clothes.

So I shuffled into the shower and stood under the tap like a turtle on her hind legs. The hot water felt delicious, and I stood there for a long long time with my eyes closed (nothing else to do that day, really).

Finally I opened my eyes and looked around. And then I looked down. What I saw made me gasp out loud, and I had to grasp the soap dish to keep myself from collapsing. My bandage had fallen off and my cut, which went from one side of my waist was completely exposed. Holy F*ck. So much worse than I'd expected. 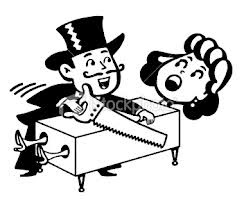 It looked as though I’d gone to the world’s worst circus and had been forced into a wooden box by a bad magician in a cheap suit holding a tree saw. And to the delight of the audience, he’d actually cut me in half!

The scar – which goes form one side of my waist to the other is about 14” wide. I thought, mistakenly, that it would be a gentle line down near my bikini, but rather it looks like a jagged red belt belt that sits well above my hips. And it is indeed a clean line - but only when compared to a line that might come from being trapped in the Jaws of 40’ shark.  Sweet Jesus, it’s a doozy.

I flung open the shower curtain and grabbed wildly for a towel that I could wrap around my body. Once I was covered up it wasn’t so bad, but it took a few minutes for my heart to stop pounding.

That was yesterday. Today was Nurse Debbie's last day. I begged her to come back but she's says that I no longer need her.

I can barely face my stomach, and I’ve yet to see my boobs. Step right up - this is going to be the toughest show on earth.

Following surgery I became a ‘She’.

An incoherent blob floating out and into consciousness, just in time to hear someone discuss me like an old houseplant.
‘Does she need some water?’
‘Think she’ll come back to life?’

It was understandable in the hospital. Some days I’d try to blend in with the bedding so the doctors wouldn’t send me home. And I’d hear, ‘Is she eating’, ‘Is she awake’, ‘Should we up her pain pills?'

Decisions were being made for me, regardless of the fact that I was within hearing and speaking distance of everyone in the room. ‘Is she on solid foods?’ ‘Should she have a protein shake,' and ‘There is no way that she is going to eat that pineapple chicken. Ever.’

Now I’m at home, and until very recently my nurse/mother Violet was here taking care of me. With the absolute best intentions, she and Jim have looked after me. But even though I was walking and talking and showering – they still treated me like I wasn’t in the room.
‘Would she like some asparagus with her dinner?’
‘Good idea. They’re easy to eat, so she can eat them with her fingers.’
‘I can cut up food you know,’ I’d say .
Mom would turn to Jim, ‘No she can’t. She can barely cut up food at the best of times. I don’t think we should encourage her.'

So I’d shuffle out of the kitchen, and into the living room to my adopted headquarters on the couch where I’d perch in front of a stack of pillows. Sometimes I’d dine on the sofa, sometimes at the table, and often on the back deck. ‘She could use some fresh air.'

Then one night it was just mom and I. We were having a senior’s night – boiled vegetables and back-to-back episodes of the ‘Murdoch Mysteries’. Without Jim she had no choice but to talk to me directly. I must admit, she’s got the nurse /mother role down pat. She knows exactly what soothes me, and when it’s time to leave me alone. I was enjoying her company, as well as being involved in the conversation.

Then I sort of feel asleep, and mom got on the phone. I could hear her talking to our dear friends out in Cape Breton. ‘She’s dong great,’ She purred lovingly. As well as ‘ ‘She’s been such a trooper’, and ‘She’s finally got some colour. She was pretty pale there for a while.'

Then I could here some laughing. ‘Well you should see her walk!’ Giggling. ‘She shuffles along in her robe with her feet spread like a little duck.'  More giggles. ‘Remember old Angus? Well, from the side she looks just like him.’  Pause for appreciative chuckles coming down the wire, ‘From the side she looks like a turtle - all skinny and hunched over.  And she clasps her hands behind her back, just like he used to do.'

There was a bit more giggling while the Cape Bretonners got in their two cents. In my drowsy state I was only making out a few words.
‘She’. And, ‘skinny’.

All is forgiven. Please continue.  Pretend I’m not even here.