Rhoda Morgenstern was my favorite TV lady when I was growing up. Not only was she a straight talking New Yorker, but she really knew how to rock a headscarf.  Plus she was Jewish, which, at the time, made her seem even more exotic. I never quite understood what she saw in Mary Richards but it gave me hope that one day I too would have such a groovy friend. 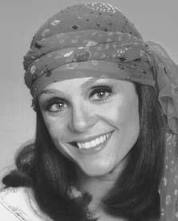 So I was very pleased when my sister told me that I reminded her of Rhoda. I’ve taken to wearing headscarves and my sister pointed out the similarity. Then she elaborated, ‘Well you look kind of like a Chinese baby cus your hair is standing up on end. But a Chinese Baby-Rhoda.” I told her that I thought I looked more like an ostrich. Yes, she said. ‘But an Ostrich crossed with Rhoda. And a Chinese Baby.’ So I depend on the scarves to tame all my crazy hairs. Gel isn’t really doing the trick, and my temples are still bald, so scarves seem to be the answer. Unlike Rhoda, who liked to cover her entire scalp with a scarf, I tie mine around my head like a hair band. The whole head-cover, which looks great on some people, always reminds me of the ladies at Princess Margaret, and it is a look I vehemently avoid.  And a scarf/band does a good job squishing the ‘Amy Winehouse middle sh* while covering my bald temples at the same time.

More importantly, it gives me confidence.  My hair is no longer freakishly short, and with the scarf it looks like a proper hair-do. Maybe not quite appropriate for my face, but a hairdo nonetheless. With my big glasses and colourful accessories, I look just as brash as Rhoda, though inside I’m still me . So when I meet people for the first time, I feel like I’m dressed up for Halloween.

Last week I went out for dinner with a short haired friend. Even though she has three times more hair than me, hers is still pretty short. Yet it is lovely, and stylish, and suits her pretty face. Our waitress also had short hair. With her high cheekbones, and olive skin, she would have been a fool not to keep it cropped.

I was wearing  a blue scarf which was knotted at the back  of my neck, the ends hanging down just below the collar of my blouse. At the end of the night the waitress told me that she really loved what I was doing with my hair. It’s been so long that I’ve had a hair compliment that I automatically assumed she was talking to my friend. It took a moment to realize that it was for me, and I slowly came round in the way that you would if you’d been on a lunch break for the last ten months. I think my mouth was hanging open, and I may have said ‘Huh?


‘Your scarf is great,’ she said, ‘I feel inspired to do the same with my own hair’. I channelled my inner Baby Rhoda, and mustered up a confident ‘thank-you’.  As though I was a brash New Yorker living in an funky Minneapolis attic, and dressing windows for a living.  As though I was a baby fashion icon, as though I get compliments all the time.