The Intern & The Snail

At  10:00 am on the dot, I showed up for my first annual appointment with my Breast Surgeon, and was greeted by the receptionist. ‘Oh Dear,’ she gave me a pitying glance, ‘He isn’t here.’ (My yearly check-up with Dr Escargot; the surgeon who forgot to show up on the day of my surgery, leaving his fellow surgeons scrambling to find an immediate replacement. But I’m almost over that now. Time to move ahead).

I’m pretty sure I rolled my eyes. ‘Is it me?’ I asked. We both laughed a fake laugh, and she explained there’d been an emergency, and he wouldn’t be back till 2. Would I like to see an intern? No. Screw off.  I would not.

I returned at 2 and was ushered into a room. The nurse said that Escargot would be crawling in shortly, but in the meantime, would I mind if the intern came in to ask a few question. This time I said okay, but it was mostly ‘cus I was bored. Also, Mount Sinai is a teaching hospital, so everybody is much happier if the fellows, interns, and students are allowed to touch some naked flesh. (My boobs are extra fun, because they were created from my stomach and have recently been adorned with fabulous new nipples).

I was sitting on the table when the intern walked in, clutching a clipboard to her chest. She asked if she could examine me. I asked if her hands were warm. Three years ago I never would have asked such a thing, but I had become a bit cocky. Now that my breasts are numb it doesn’t really matter – so it was mostly about who had the power (me). I lay down, and Dr Intern began her examination.

After a few squeezes she asked about my follow up treatment, and whether I’d lined up a mammogram. I told her I would not be having a mammogram, as I did not have any breast tissue. She squeezed a bit more. ‘So you have implants?’ I shook my head. No – no implants. She looked confused. ‘Small ones?’ she asked. I told her no. She frowned and looked at her notes. ‘You had a double mastectomy. Right? But no implants?’ I told her she was correct.

I didn’t tell her that I’d had DIEP reconstruction because it didn’t occur to me that she wouldn’t know. Wasn’t my whole history on the clipboard? Weren’t the interns debriefed before they but on white coats and pretended they’re doctors? Was she about to cry?

Dr Escargot came in the room and took my hand in his. He explained the DIEP surgery to the intern and told her that it was a very long operation because of all the tricky medical stuff.
‘Twelve hours?' he asked me – in a manner you’d ask a pal with a shared experience.
I paused for a second. Did he really not remember?
‘Nine,’ I said.
We locked eyes for a second and I waited for recognition to creep in. Nine hours was considered remarkably short for bilateral DIEP, and only because I got two extra surgeons on board during the initial scramble to cover Escargots absent arse after it became apparent that he was not in the hospital, and and had just flown off to Germany! But …nothing. His little snail eyes were unburdened.

Clearly, the same could not be said for me. I still carried the resentment. Escargot may move like a snail but his shell was light – I was the one with the baggage. So along with my gown, I ditched it, and let the baby doctor have one more admiring glance before I hopped off the table and moved ahead for real. 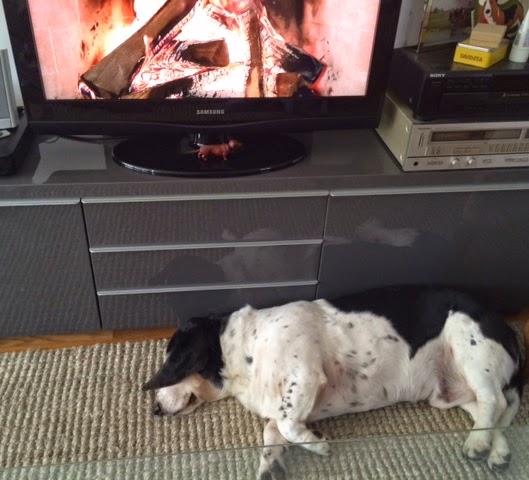 I like to do as little as possible after Christmas, especially this year when I could say 'so long' to the social whirlwind and sit back and enjoy doing nothing. So,  I was delighted this holiday when I stumbled upon Fireplace TV.

Initially I had it on to keep me company as I wrapped gifts and drank champagne, but then I started having it on all the time. Not having a fireplace of our own I quickly grew to love the sound of crackling, and the flicker of light. I found myself fixated many times by the quivering flame.

Nothing happens on this channel! There is no plot, no cast, and no drama. Remember how Seinfeld was a ‘show about nothing? ‘ Well that is an edge-of-yourp-seat thriller compared to Fireplace TV, where, if you’re VERY lucky, you might see a burning ember floating towards the chimney.

I was doing some yoga stretches yesterday, when Jim wandered into living  room and asked if he could change the channel. I told him no. He gave me the same look he gives me when I’m watching ‘Dancing with the Stars’ and asked why I wanted to waste my time watching a fake fireplace.

While I recognize that this may slightly weird for me, for Norwegians it is a national obsession.  Over half the population tunes in to nothing! It all began in 2009 with a five-day broadcast of a cruise ship traveling up the West Coast of Norway in real time. More than three million people tuned into watch – and that is over half the population!

Following the smashing success of a cruise ship doing nothing, Norway followed it up with a 10-hour train ride, 18-hours of salmon spawning, and nine-hours of knitting. Each marathon was a massive hit, pulling in eager audiences from a tiny rich country where everybody wears wooly sweaters.

So I looked into why it was so popular. Our lives are busy (obviously) and we’re surrounded by bite size nuggets of information constantly being hurled at our brain. So Slow TV (as it has been dubbed) is a chance to calm down. It’s the opposite of instant gratification.

There is another theory though, that maybe we watch things because we’re waiting for something to happen. While I continued , Jim plopped himself down on the sofa. Twenty minutes later Jed, who seemed slightly hypnotized, lay down in front of the TV. We carried on quietly for a while until Jim sat upright. ‘Janet, look!’ he shouted. ‘I saw a hand!’

Brimming with excitement, he told me that a human hand holding a poker had emerged from the right side of the screen and prodded a log! He could barely contain himself. ‘Come Sit Down and Wait!’ he said. ‘We might see it again!’

So we did our favorite things. We sat with our pets doing nothing, and watched a roaring fire on TV.  Hoping something might happen, content if everything stayed the same.