This year I’m going to Cuba for Christmas.  Joining me,  along with my bathing suit and sandals, will be my fleshy pork sleeve and matching gauntlet. So far it’s been easy to match my compression garments under a long sleeve shirt where they can be ignored, but now they’re going on vacation and it’s going to be hot.

But c’est la vie. It’s not as though I’m going to be lying on the beach, because I’m not allowed. My post-radiated body won’t do well in the sun, so I was already on planning on settling down under a palm tree. And if that didn’t work, I would be just as happy in the bar, with a mojito and a good book by my side.

So I had to make a return trip to Mansueta boutique, home of the unstylish medical garments. I’d called the Lymphedema Clinic because my thumb had become numb.  They suggested that my gauntlet might need refitting, which led me to Mansueta and my  tiny Filipino friend, Nanci.

I sat down on the stool while she fiddled with my hand. She was wearing heels that day, so we were eye to eye, and I was stuck by how large I felt in her presence – as though I was size of her buffalo.

‘Hm,’ she said stretching the fabric. ‘You hab no feeling in your thumb?’ I told her that I had pins and needles. I was worrying, in fact, that the lymphedema was spreading. I’d been doing my exercise, and the occasional self-massage, but as it’s Christmas, I’d been a bit lazy. Would I every feel my thumb again? Squeeze a lime, or open a tin of smoked oysters?

Nanci removed my gauntlet, pulled it a bit, and then put it back on my hand. Gently she rolled the fabric up my thumb, then folded the final 1/2 inch. ‘How is that?’ she asked. Wow! What a difference. ‘The babric was too tight and too high’ she told me. I looked at my thumb.
‘So all you had to do was make a little turtleneck?'

She laughed. ‘Yes, a turtleneck’.

So now my thumb has an outfit. It’s not the fashion choice my thumb would have chosen for a Cuban vacation, as he prefers  to go the minimalist route, in the manner of a German tourist. But even though the colour's all wrong, at least it's better than a speedo.

(Just for fun, I looked up how to say ‘thumb’ in Spanish. The slang is ‘dedo gordo’. I don’t know that dedo means, but gordo means fat, and I think that Gord is a perfectly good name for my thumb.)

So us gals are off to Cuba, accompanied by my nephew Caleb (12), and Gordo in his turtleneck. And Gordon is now in charge of squeezing the lime.
Posted by egghead at 14:10 1 comment:

Last year I was visited by a fairy. And no – it wasn’t the steroids, or any other mélange of drugs – it was an actual fairy, for real.

It was last Halloween, and I was standing on my sisters' porch dressed as Jane Goodall, with a couple of monkeys strapped to my hip, and an itchy blonde wig on my bald head. All the kids came storming up the stairs with their big bags , saying trick or treat. The little kids were the best, because they were expecting magic, and on their best behavior. As the night got later, the kids got older, and sometimes they mumbled thank-you, and sometimes they said nothing at all. Some of them wore a mask, but there was little magic, and even fewer manners. I gave them all candy anyway, cus I’m a grown-up and it was Halloween.

Last night I was going through a drawer looking for some Christmas magic of my own - a sparkly hair clip. I only have a few inches of hair these days, but I love it, and thought it deserving of a clip covered in fake diamonds. In my search, I came across a little box where I keep a favorite necklace. I opened it, and found a small piece of paper. It was pink, and folded in half. I opened it, and on it said ‘ 3 Wishes.’ 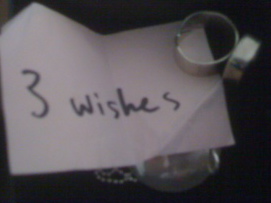 And then I remembered. I was standing on the front porch (as Jane) handing out the last of the candy to teenagers. On of the last girl up the stairs was about my height, and even though a little heavy, she walked like she was traveling on air. I can’t remember what she was wearing. But she came up the front steps announced she was a fairy, and said I had three wishes. She handed me the piece of pink paper and headed down the stairs.

I can’t remember what I was thinking at the time. I was completely crazed, so I don’t remember what happened between that Halloween and today. I probably wished for good health. I like to think I also wished for world peace, but because of the drugs, I might have just wished for another season of Downton Abbey, or some slippers.  Whatever.

Due to my delicate condition those last wishes didn’t count, so they are still valid today. And since there’s not lot for me to wish for,  I’ll consign my wishes to another who may need some fairy dust.

My true gift was finding this piece of pink paper. In this season, we’re always looking something more than parties and pie. Beyond the sequined sweaters and bulging credit cards, there’s something else out there,  just waiting to be found. And I found it unexpectedly, tucked away in a drawer while I was getting dressed for a party.

I never did find my hair hair clip with a bit of sparkle, but I did find a bit of magic instead.