On the way home from my favorite place, I was selected for the super-inspection from airport security. I was flying from Halifax, and after de-belting and de-shoeing, I still set off  al the buzzers. Having no metal on my person, I was surprised by all the commotion, and thought that maybe I was being penalizied for not purchasing a carry-on lobster from the airport fish store. Jim and I seemed to be the only ones who hadn’t bought any crustacean souvenirs.

But a very nice lady took me aside, and told I’d been selected to for an uber-check. She seemed conscious of the fact that this was a minor inconvenience. She also seemed to recognize the fact that I wasn’t a terrorist.

I had two options: a good old fashioned east cost pat down, or being enclosed in a giant tube, reminiscent of the one built for the Chilean Miners. I looked at the tube, with its’ exterior screen, and wondered who would be looking at me naked. What if I was be looked at by the airport perv?  Would he be able to glimpse beneath my Levi’s, and would he notice I had a-symmetrical breasts?

‘Who does the the pat-down?’ I asked the nice lady. ‘Me’ she said.  ‘That’ll be fine,’ I said, thinking that she reminded me of my old kindergarten teacher –so how bad could it be.  Then her next question, ‘Would you like to do it here, or in private?’


At that, I froze. ‘Why would I want privacy?’ I asked, my voice a little higher than I intended. She explained that some people prefer not to be inspected in front of the general public. I looked at the line up of people behind me, tan happy faces carrying a box of overpriced lobster. My voice rose another half octave. ‘I keep my clothes on, right?’ She nodded and reached for her box of rubber gloves. ‘Right?!?’ I squeaked.

‘Have you had any recent surgery?’ She asked.  I paused. She looked at me kindly. ‘Anything tenderness I should be aware of? ‘ I paused again. ‘Sorry,’ she said, ‘But I have to ask’. I thought for a moment about my occasional breast pain and numbness in my right arm – and realized how often they pop up in my thoughts.  But there are always people worse off then me. There are people with brand new kidney’s for God’s sake – though they’re probably not driving the Cabot trail. 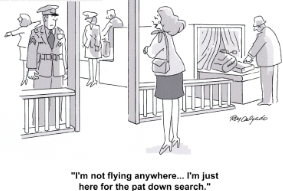 Now – while I have developed a certain intimacy with medical professionals, I’m not used to being fondled by a lady in uniform. But part of my brain has learned to click off when I’m going to be manhandled. After all, I’ve been to over 100 doctors appointments the last year alone, and most of those were topless. So I clicked on that new brain-part, and surrendered myself to a frisking.

She patted my arms and legs and gently tapped around my back and shoulder. Not bad. In fact, quite pleasant. ‘That feels kind of good,’ I told her. I wanted to ask her if she could go a bit higher and get at the area between my shoulder blades, but she had a whole line up waiting for her services. Jim, who was busily reattaching his belt looked at me with something akin to longing.

Of course, the whole thing could have been unpleasant. But it wasn’t. But sometimes things are fun when you allow them to be. Especially in Nova Scotia.