Jed and I were out in the neighborhood yesterday morning, walking at 1 mile per hour.  He was having a particularly sniffy day, and he was stopping to smell each fragrant shrub and every single snowflake.

Jed stopped to pee on a discarded tricycle, and I watched the elderly gentleman shuffle along. He was slightly stooped, and was wearing the kind of shapeless chinos favoured by older men, the kind into which you can jam a few hankies and a wallet.  He seemed deep in concentration as he and his friend navigated the winter sidewalk. Inside my head I was chanting ‘Please don’t fall please don’t fall don’t fall’. For the millionth time that day I was grateful for my strength and mobility. I thank the universe every day that I can breath deeply, and get where I need to go. Who cares that I’ve got Frankenboobies  - that’s what French bras are for.

The van was only five feet ahead, but the walk was slow. Rather than pass them, Jed and I crossed the street, and watched them from the other side. They all were heading towards the drivers side of the vehicle. Apparently it would take two men to help him into the back seat.

The young man opened the driver’s door and the passenger door. And the older man in the walker shuffled to the back door and then shuffled right on past it toward the younger man. The young man took the walker, set it aside, and with the help of the friend, picked up the older gentleman and plopped him behind the wheel.
I watched. And waited. And Jed licked a snow bank. And then I stepped back as the van jerked away from the sidewalk, and tore loudly up the street.

Control comes in all shapes and sizes, and in this case is was a 4000 pound container with rubber burning under it's feet.

The days are getting longer.

Like most Canadians, I look up at the sky like a sunflower, impatient for the extra light and drinking in as many rays as possible. But this year I’ve also embraced the evenings, and have been using the outdoors to my advantage. The early nights allow a certain anonymity, so once the sun goes down, under the cloak of darkness, I march.

After being diagnosed with lymphedema last fall I learned that I had to do exercises to compensate for my loss of nodes. My lymph fluids need extra help circulating, especially through my right arm, so it doesn't swell up like a fleshy pork sausage.

Every few months I check in at the Lymphedema Clinic at Princess Margaret Hospital. The circumferences of both arms are measured to make sure they are under control (they are). While there, the therapist asks if I’d like to do a self-massage under her guidance (no), or if I’d rather she massage me (yes please!)

Then we go through the basic preventative exercises, two of which I do in the car. Keeping my arm elevated, and pumping my fist are easy to do when stuck in traffic. (Thanks to my dad I’m a one-armed driver, as my driving lessons consisted of driving to Baskin Robbins, and then a driving home holding a rocky road ice-cream cone). 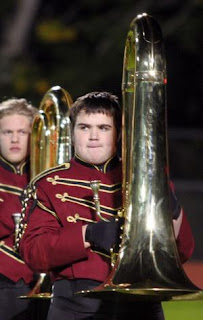 Because there are also nodes in the groin area, the therapist suggested I stimulate them by marching.
‘Marching?’ I asked her, ‘Like a soldier?’
‘More like a marching band,’ she said. ‘Soldiers don’t always bend their knees.’

And so I march. But instead of carrying an intstrument, I’m pulling a basset hound. Or more likely, he’s pulling me as I march quickly behind. I’m keenly aware that I probably look like a clumsy wind up toy, and not like the elegant French lady I so long to be. Nobody ever marches down to the patisserie for a baguette, and certainly not while wearing a parka.

But my body has changed, and I’m constantly trying to compensate for it’s revisions. So I’m appreciate the dark night, when I can march through my neighborhood, without actually being seen.

Spring is coming, and soon my neighbors will be sitting on front porches. And I will march by them, with Jed disguised as a tuba.