There are three good things about chemo day. (Actually four, if you include the life-saving aspect) Firstly, I’m amongst my people. Most scenarios,  I’m the only person wearing a wig, and the only one with a secret. Yesterday I invited an acquaintance in for coffee, and once we got in my house, I realized I couldn’t take  my hat off  (my hair sometimes comes with it). But at Mt Sinai Hotel  & Spa, my brethren surround me.

Today, in the waiting room, I was the only one with hair.  Three women wore kerchiefs, two were wearing hats, and one had a glorious purple scarf wrapped around her head, a sparkling diamond clasp at the nape of her neck. Another woman, the most beautiful in the room, was completely bald, and glowing. I’d seen her a week early, with full dark Mediterranean curls. Now she was even more gorgeous, fully accessorized, laughing, and acting as though hair had been an inconvenience her entire life, so she’d decided to get rid of it. Like a bad marriage. Or a futon.

The second good thing are the egg sandwiches. A cheerful Scottish volunteer rolls around a trolley full of food. Today she was wearing pearls.  Amongst her wee snacks are juice, cookies, cheese & crackers, and egg  sandwiches.  She hands them out to everybody, patients and companions alike.  As far as egg sandwiches goes, these are the really good ones only found at senior’s bridge games, and funerals. 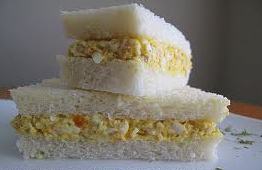 Squishy white bread, a thin layer of egg (with a droplet of mayonnaise), thoughtfully cut on the diagonal. When she saw us walking down the hall (en route for a blood taste) she was genuinely concerned that we might miss our treats and drove her trolley at top speed to load us up with cookies. Later, when we were settled, she came by and offered Jim a sandwich. “Egg or Tuna dear?” His eyes lit up “ Egg Sandwich, Please!’’

Thirdly are the nurses, and  particularly mine, Nurse Marion. She moves around the room as though she’s hosting a cocktail party, handing out blankets, sharing tips on shoes, and checking my IV bag. “Oh look dear, we’re almost done with this one, let’s have another!” she says merrily, as though it just occurred to her that one more Mai-Tai might just be in order. Her mood, like the other health care people in the room, is decidedly upbeat.

As we left yesterday, loaded up with cookies and juice (something for the road) I said goodbye- to Marion. In the corner of the room was a fragile looking lady, sleeping under a blue blanket. She was in a vinyl lazy-boy like mine, and her little bald head was resting on a pillow. As the trolley went on it’s final round, her head jerked straight up and she said, “Dammit! Did I miss the sandwiches?”

Just another day at the spa.