It's Not Easy Being Green

Steroids are a funny drug. Not funny ‘ha-ha’. Funny in the way that my nerve endings sizzle, and the humming deep in my core is poised to erupt into a full scream. At any given moment, should anyone touch me inappropriately, or ask me a stupid question, I will change from mild mannered bald lady into the giant green monster known as the Incredible Hulk. Last week I was full of steroids, with the puffy face to prove it. Normal-ish on the outside,  I was spring-loaded on the inside. Bright lights hurt my eyes, harsh sounds hurt my ears, and pointless conversation hurt my brain. 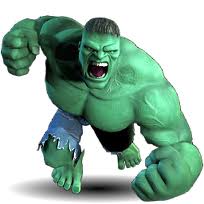 During steroid week, I can end almost all conversations with, ‘I don’t give a sh*t’ and ‘Why are you still talking?’  The people in the dog park, normally inoffensive, seem as though they’ve been put on this earth specifically to annoy me. One lady with a faux leopard hat said that she’d taken the day off work to go to the dentist. “So?” I may or may not have said out loud. Seconds later, I’d wandered away, blinded by the sun, overcome with hostility.

I know now that there are things I should avoid during steroid days, which is pretty much everything. In the outside world, I don’t want to put myself in a position where someone might invade my personal space. God help the person who bumps my arm while I’m pouring milk into my take-out coffee, or nudges me off the sidewalk as they roll through Leslieville with their double wide jogging stroller, and a Labradoodle.

Things aren’t that much better at home. I avoid Jim’s tough lines of questioning, such as ‘What can I make you for dinner?’ or ‘Would you like an extra blanket?’ (And I've apologized to him for throwing box of Shreddies at his head). I especially avoid anyone who may leave extra long messages on their answering machines. I don’t want to sit through another Buddhist prayer, or listen to an entire family explain in rhyme, why they’re not home. I don’t care. Why are they still talking?

Unfortunately for my Psychiatrist, I was steroid crazy when I went to see her for our last session. She was 15 minutes late for the appointment so I was already jumpy when we finally got started. I’d barely sat down before launching into a brisk monologue regarding my lack of patience and crawling skin.  She nodded in that way that people nod when they’ve been to medical school for fifteen years. (I noticed that she was wearing ugly men’s black ankle socks). I glared at her, willing her to respond, my right knee bouncing uncontrollably. “I understand,” she said finally (finally!), “People are dealing with issues that have solutions, while your situation is life or death.”

I sizzled. My knee stopped jiggling. The hum in my stomach started vibrating wildly. “I need to correct you,” I said in someone else's voice, which sounded to me like Kathleen Turner, but was probably more like Lou Ferrigno. “I am not dealing with life or death,” I said, “ I’m dealing with life or life. Death is no longer an option.” I glared at her through blood shot eyes, ready to squish her like a bug with my enormous green hands.

The Hulk was angry. He leaned back in his chair and took a deep breath while Dr L.  crossed her legs, and apologized for her careless wording. The Hulk thought she should also apologize for her socks. But he accepted the apology, and I watched as my hands turn back to their regular size and colour.

I sat up and smiled, “Okay Doctor, let's move ahead.” 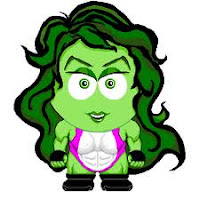